Yuvraj Singh and Hazel Keech got married in a hindu ceremony in goa. After Virat Kohli and Anushka Sharma grabbed the limelight, it was Zaheer Khan’s turn to steal the attention. Zaheer Khan was seen with Sagarika Ghatge in Yuvraj-Hazel wedding. There is a news that Zaheer is dating Sagarika since last four months. The both met through a common friend around 18 months ago and they soon started liking each other. That common friend is none other than Angad Bedi. They have been spotted many times together at social parties and events. It is also a coincidence that Sagarika dated a cricketer in her debut movie, Chak De India.

Zaheer Khan and Sagarika Ghatge were hand in hand at the wedding and they seems to be very open about their relationship.

Zaheer dated Isha Sharvani earlier . Isha and Zaheer were together for a long time but their relationship does not led to marriage. If reports have to be believed, Both were very serious about each other but they have to part away due to circumstances. Both maintained a dignified silence over the reasons for their breakup and only they know why they choose to separate. 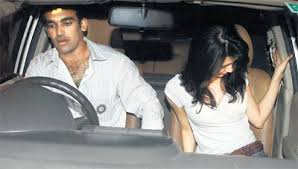 We wish that Zaheer will be lucky this time.